Over the past 10 years I have been fortunate enough to photograph some of the most influential people in the arena of politics and international affairs. I alway find dignitaries to be the most interesting people (even if I don’t always agree with their politics). 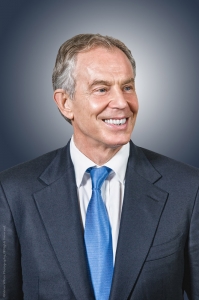 After just having finished reading a book , “A Journey: My Political Life” by former British Prime Minister Tony Blair, I was excited to be given the great opportunity to shoot Mr. Blair for the World Leaders Conference which happened to be hosted here in West Palm Beach at Palm Beach Atlantic University.

For this portrait I wanted to have a portrait one would expect to see in an old world portrait gallery. I also wanted to emphasize the character that the years have given to Prime Minister Tony Blair.

I must say, I was surprised by Tony Blair’s sense of humor and how down-to-earth he is. To hear him talk about his time on Downing Street and his desire to make the case for faith as a force for good in the modern world was really inspiring.